Skip to content
STORE OPEN BY APPOINTMENT ONLY IN JANUARY. TO SCHEDULE YOUR VISIT 313-649-7741

Detroiters may have noticed a few new ‘large-scale’ public artworks around the city over the past week. These ‘artwork’ vinyl wallscapes are part of a custom outdoor campaign for the movie DETROIT, commissioned by Annapurna Pictures by four local artists who have family history in connection to the events of 1967.

This year is the 50th anniversary of the 1967 ‘riots’ or ‘rebellion’ and several cultural institutions including the Detroit Historical Museum, the Detroit Institute of Arts, and the Charles H. Wright Museum are “looking backwards to move forward,” by hosting special exhibitions and public programming in order to encourage residents to engage in their painful history, often not discussed and provide opportunities for conversation and education around what happened in July 1967.

The participating Detroit artists chosen by Annapurna Pictures to create the large-scale artwork pieces include Marlo Broughton, Sydney G James, Nic Notion, and Jacx Schanes. They were invited to see the film and created pieces based on their reactions within a week after viewing it.

The hand-painted mural was completed by Notion in Eastern Market along Russell Street, and the various vinyl wall-scapes from Broughton, James, and Schanes can be seen throughout downtown Detroit in multiple locations on large buildings. PLAYGROUND DETROIT partnered with Annapurna Pictures to curate their selection of the four Detroit artists. The film DETROIT hits theaters everywhere August 4, 2017. Read on for more information and biographies on each of the artists chosen to participate. 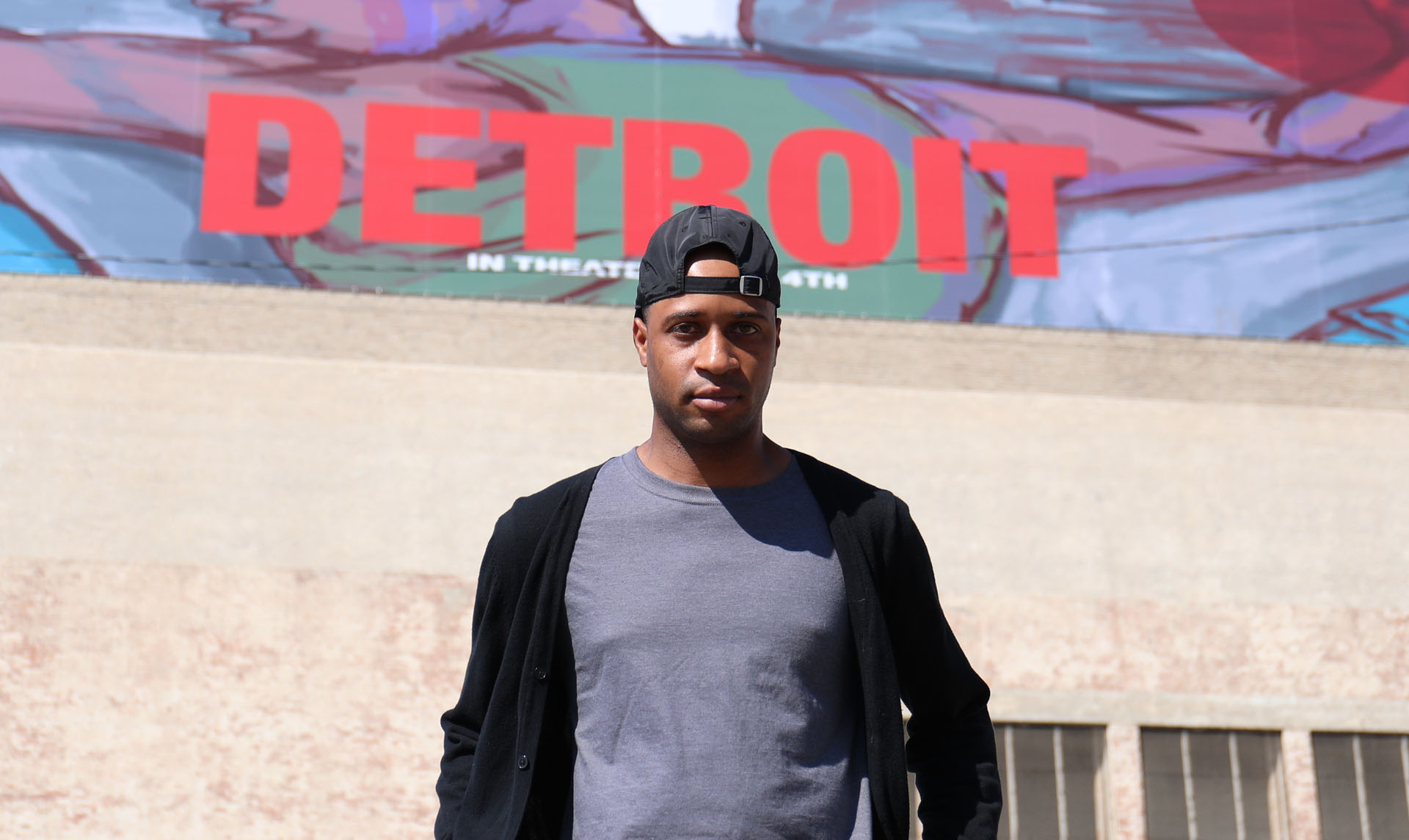 Broughton’s family mostly resided on Grand River Blvd at Wyoming Rd and 7 Mile Road at McNichols Road during his childhood. His elders stressed their collective struggle to succeed, as they showed him the sites around the city and the aftermath of the rebellion. Broughton’s male cousins and uncles were beaten, assaulted, and critically injured, and locked up by the police while going to and from work, especially if they were late for the city curfew – and these beatings had lifelong effects. Police assaulted one aunt, she recalls being called a prostitute just for walking down the street in order to get home before the imposed curfew. The family as a whole lost properties, homes, and businesses due to the riots. One of Marlo’s first pieces, “Ps and Qs,” is a depiction of the riots & police brutality.

Marlo, born in Detroit in 1987, has been involved in the creative scene in Detroit since 2007. After studying industrial design at Wayne State, he joined the creative group FINALLY FAMOUS, whose core collective helped to propelled Big Sean’s indie career. At that time, Marlo and his partner Tommey Walker created many of Big Sean’s graphic works. Currently, Marlo is focused on painting. Broughton works with several of Detroit creative agencies including PLAYGROUND DETROIT, Inner State Gallery and 1xRun, DIA and Red Bull House Of Art. 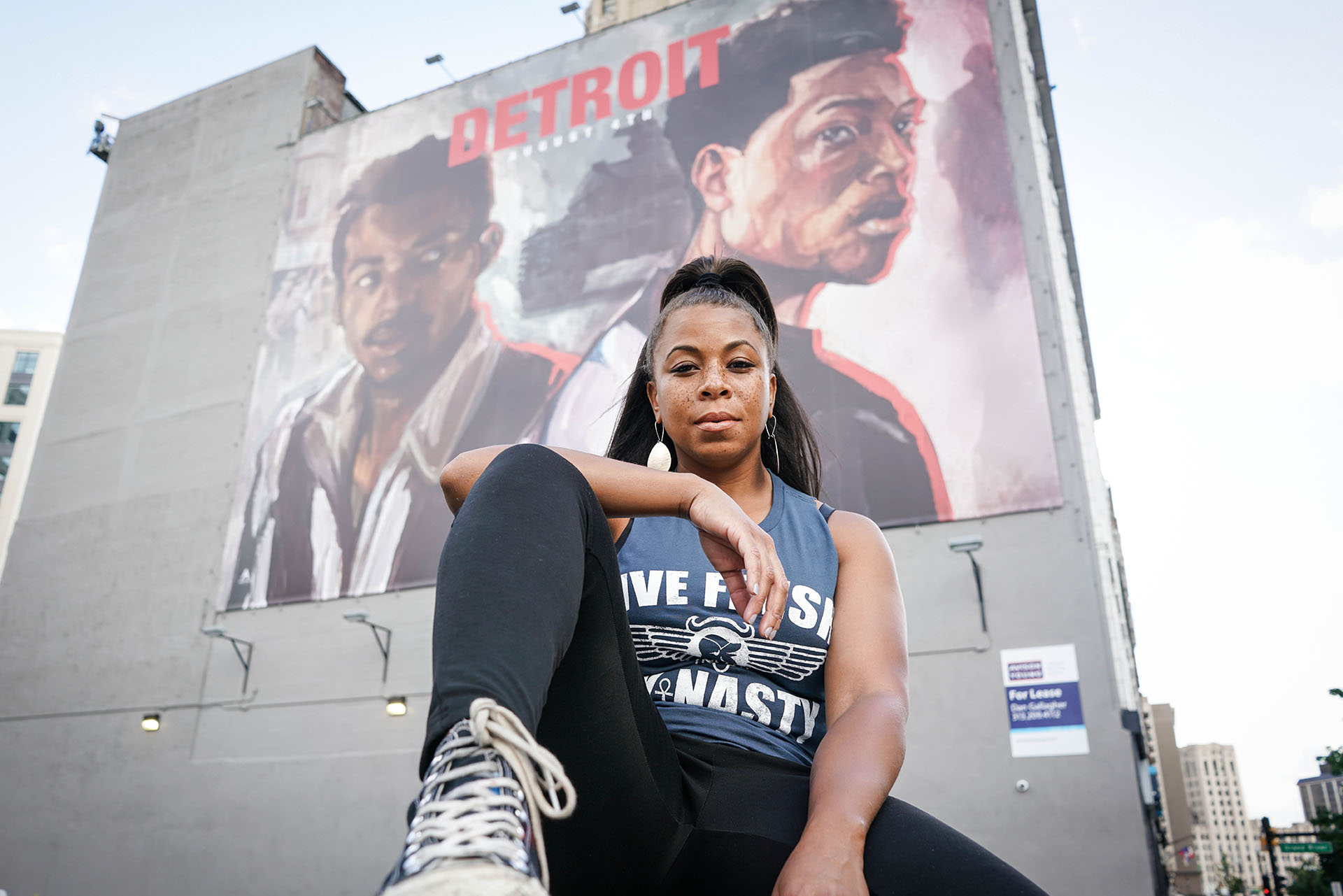 James was born in Detroit on July 6, 1979 and raised in Detroit’s historical Conant Gardens neighborhood, the first area in Detroit where black people could own and build homes. As a second generation Detroiter, Sydney’s grandparents moved to the city from the south during the Great-Migration. Both of Sydney’s parents grew up in a segregated Detroit and experienced the turn into integration. Sydney’s art is greatly influenced by her parents’ journeys, grounding her experiences with the city’s history.

Sydney’s artwork consists of large-scale murals, figurative paintings and drawings that embody and demonstrate ideas and scenarios that affect her. James’ current body of work consists of images of “strong” black women in vulnerable scenarios that may be figurative or literal. These pieces portray black women in American society – often viewed as “lesser than,” or not seen at all. Sydney G. James began her career as an ad agency Art Director after earning her BFA in 2001. In 2004, Sydney relocated to Los Angeles briefly before returning to Detroit in 2011. She has since become one of the leading creative change agents in the city participating in community arts projects, was awarded a Red Bull House of Art residency and has completed murals in Detroit, Atlanta, and Los Angeles. 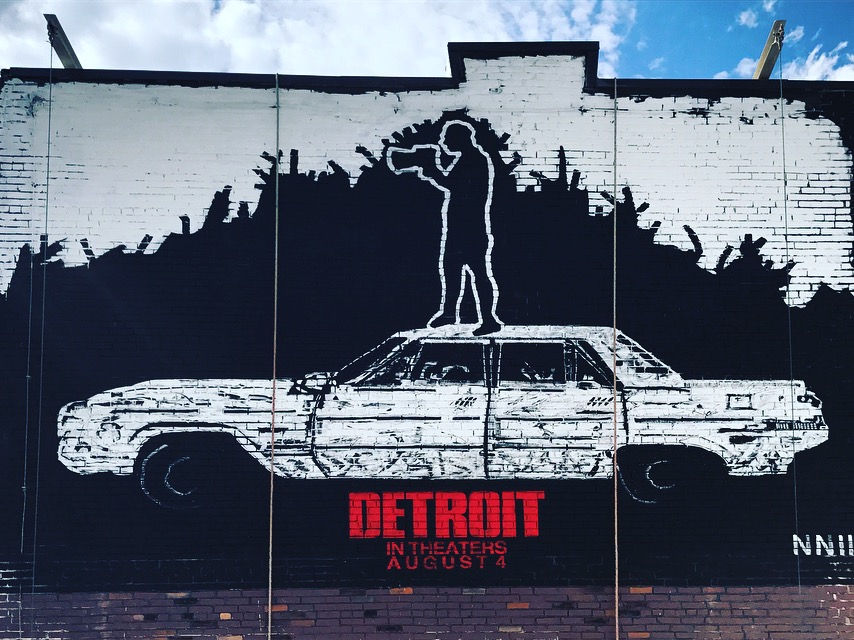 Notion’s paintings mirror his surroundings: within every pile of rubble is a story of what once was.Much of his work depicts abstract houses and structures decaying and burning; an urban landscape being over taken by nature, and anonymous figures partaking in mischievous behavior. He experiments with elements of street art, using non-traditional methods to reflect his environment.

Notion’s father and uncles grew up in Highland Park; an enclave of Detroit that reached its peak in development and population thanks to Ford who opened factory doors with the first assembly line in 1913. 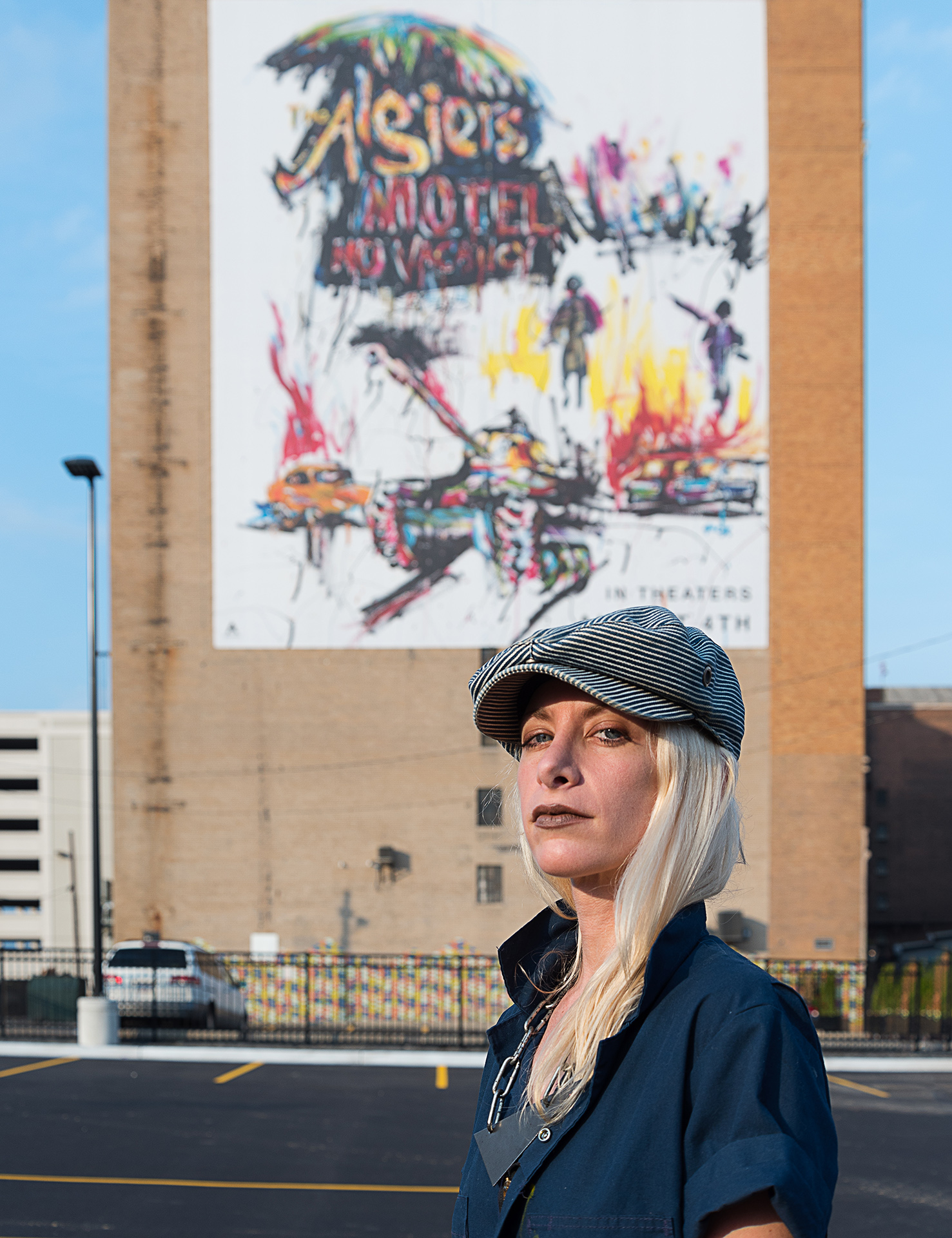 Jacx Schanes was born in Detroit in 1984 and is a graduate from College for Creative Studies. The multimedia artist concentrates her expression through acrylic paint with a focus on the Motor City, to which her connection and heritage is deeply rooted. Her style focuses on paintings of vintage cars as well as vintage sports stars, which, with the use of white space draw your eye to their vibrant colors. Various themes in her artwork also include the concept of prejudice and judgment. In 2010, her controversial solo exhibition-happening “Show Pony” explored concepts of femininity and identity. As a female artist, she convey feelings of exploitation as a woman with her emotionally charged paintings.

Past generations of the Schanes’ family lived at 12th Street and Clairmont, as well as Seven Mile Road and Greenfield Road. Jacx’s paternal grandfather worked in sales and his clients remained at the core of the inner city of Detroit. The events of the summer of 1967 however affected business as usual and as a result of the riots, work in Detroit was not the same.